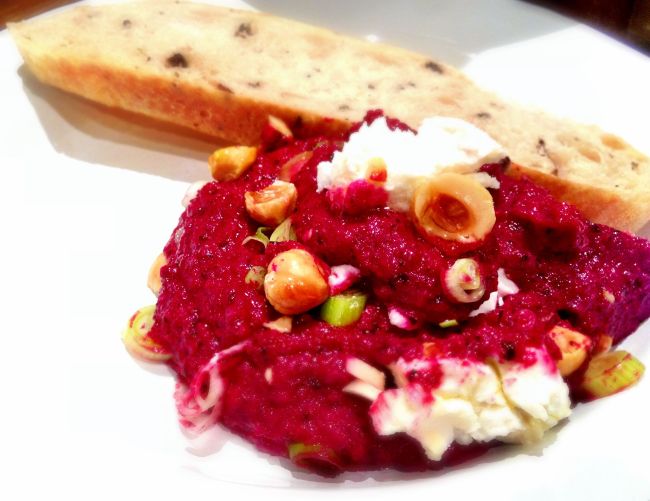 The countdown has begun and we are beginning to panic. We move the boat a week today – and we are very nervous. There is so much to do – and not enough time to do it. This weekend is a write off due to family commitments – so we are going to the boat after work and working until there is no light left. Last night we worked until 9:15pm – got home at 10pm – and then I started cooking. This was part one of our dinner.

Fortunately I’d already roasted the beetroots for this dish the previous day – so this could be made in less than 20 minutes. Very simple indeed.

Whizz the beetroot, Greek Yoghurt, Garlic, Olive Oil , Za’atar and a Red Chilli in a Magimix – until blended. Don’t blend it too much as you want it to remain coarse.

In the book it says thicken it with mashed potato if it is too runny. As luck would have it I had 4 potato and spinach cakes that I hadn’t cooked yet just sat in the fridge – so I blended them in too to make it thicker. It didn’t change the flavour at all – just made it thicker!

Once blended to the consistency you want you top with roasted hazelnuts, spring onions and goats cheese. Very very simple.

Freya popped over to her parents and pilfered a couple of slices of bread – which we toasted and dipped into the puree. It was very late when we ate dinner – almost 11pm. Not ideal to go to bed straight after work but we were both exhausted. It had been a long day! We made lots of this – and took the rest to work and shared it with our colleagues at lunchtime.

Za’atar appears in a number of Middle Eastern dishes. Wiki says – ‘Za’atar is using a mix of ground dried thyme, oregano, marjoram, or some combination thereof, mixed with toasted sesame seeds, and salt, though other spices such as sumac might also be added’. My pot of Za’atar came from my Ottolenghi ingredients box that Freya’s mum bought me. It smells lovely – and really brings the beetroot to life.

This recipe can be found in Jerusalem – another great book by Yotam Ottolenghi.

I think this would be really good as part of a Meze, or with pitta bread – a really good substitute – or rival for Houmous.

I’m guessing tonights dinner will also be a very late one. But at least the end is in sight – and in a week we can take a well earned rest!