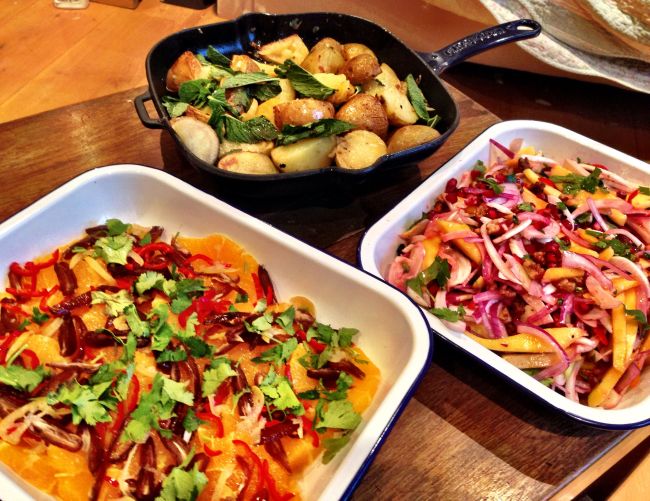 Finally I get the time to cook something nice.

It’s fair to say we’ve both been working out butts off on the boat the last few days – and not without one or two sacrifices.

We were supposed to go to the annual Industrial Goth-fest that is Resistanz in Sheffield this weekend but decided the boat came first. We are moving it next Saturday and the boat just isn’t finished. So we’ve been working some very long days – until around 8:30pm and just grabbing a snack or skipping dinner all together.

We said we’d compensated by going Rock’n’Roll dancing at Kicking the Boogie in Uxbridge but that didn’t play out either – Freya got covered in enamel boat paint and I was just exhausted from all the up and downing that is getting in and out of a 1920’s cast iron Dutch Barge.

So this was dinner today: roasted potatoes, orange salad and fennel and mango salad. It was all pretty yummy – apart from the orange salad that had mixed reviews.

All these dishes came from the pull outs of either the Times or the Telegraph. In the past I’ve been disappointed with magazine pullout recipes – they are usually a bit boring. The ones in the Times – Eat I think – are usually taken from a recently released cookbook – so they stand more chance of being a bit more special.

Hopefully I’ll find some time to cook in the next week – but we are both off – trying to get the boat painting finished before we move it to our new mooring. Mind you – if the weather was anything like today, there’ll be no painting. It hammered down all day and didn’t let up.

Anyway – back to my Gin and Cranberry juice!

1 thought on “A Well Earned Dinner”